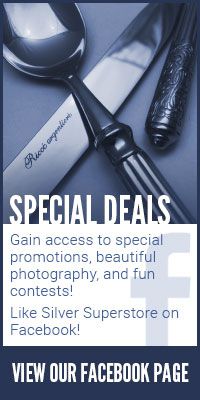 The story of Gorham begins in 1813, when Jabez Gorham completed his metalsmith apprenticeship and began making jewelry. In 1831, Jabez Gorham began manufacturing coin silver spoons, which were popular at the time for replacing pewter spoons. In 1848, Jabez Gorham sold the company to his son John Gorham, who oversaw the expansion from a small craftsman's workshop to one of the largest silver manufacturing plants in the world.

In recent years, Gorham has been purchased by several corporations, including Textron, and Brown-Forman (maker of Jack Daniels and other distilled spirits). The patterns are currently licensed for manufacture by Lifetime Brands, who own the Wallace and Towle Silversmiths names. Gorham stainless steel flatware is still manufactured by Lenox Brands.

Offerings from this Gorham:

Buttercup
Beautifully ornate and elegant, one of Gorham's most popular flatware patterns.

Chantilly
Chantilly is arguably the most popular sterling silver flatware pattern of all time, named after the famous palace of Chantilly, located near Paris. Louis XV era design.

Fairfax
Yet another Durgin creation (5 out of the first 7 patterns on this page were originally made by William B. Durgin Co.), Fairfax is a hugely popular pattern with a wide variety of available items.

Old French
This classic thread-border design first appeard in 1905. Most silver manufacturers have similar designs available, and there are several versions in stainless steel as well.

Strasbourg
Strasbourg was first introduced in 1897, at the tail-end of a French Rococo resurgence. One of Gorham's most popular patterns.

Made To Order Flatware Patterns

Bead
One of the better choices for a beaded border sterling pattern.

Chantilly Gold
The gold version of the venerable Gorham pattern.

Dauphin
Very ornate; design extends into the bowl on many pieces.

Edgemont
The Edgemont pattern is a fairly recent introduction, debuting in 1987.

Lily
Another delightful pattern originally created by the Whiting Co., which you'll want to view the closeup photos of to appreciate the complexity of this design.

Medici
Medici was introduced in 1971, and has a slightly heavier feel to it than most sterling silver patterns in its price range.

Melrose
First made in 1948, with a nice, weighty feel.

Newport Scroll
Newport Scroll is the youngest pattern available by Gorham, first appearing in 1983. You may also like 18th Century by Reed and Barton.

Rose Tiara
Delicate roses, gentle scrolls. Be sure to see Modern Victorian by Lunt, and French Provincial by Towle Silversmiths.

Sea Sculpture
Crashing waves are captured in silver on this classic Gorham pattern.

Townsend
Regal pattern that was often overlooked during its time of availability.

Our other sterling silver flatware manufacturers: